The Airtel Border-Gavaskar Trophy 2013 will be played in India from 22nd February to 26th March. The teams will play 4 Tests, with MS Dhoni leading India and Michele Clark leading Australia.

India completed a 4-0 series whitewash, as Cheteshwar Pujara helped seal the win with an unbeaten 82 in Delhi. Chasing 155 to win, India were 5/3 in a mini-collapse before MS Dhoni (12 not out) and Cheteshwar Pujara (82 not out) guided the home side to an historic series triumph, reaching 158/4 off just 31.2 overs to win with more than two days to spare. At the start of the day, the outlook was promising for Australia as they restricted India to adding only six runs to their overnight total (272 all out) with the help of spinner Nathan Lyon's career-best 7-94. Australia were skittled for 164 as man-of-the-match Ravindra Jadeja claimed 5-58 with his left-arm spinners to put the hosts on top. For Australia, tailender Peter Siddle (51 and 50) top-scored for the second time in the match - the first time a No.9 has done so in Test cricket.It's the first time Australia have lost four matches in a Test series since going down 5-1 in the 1978/79 Ashes. It is also the first time that Australia have lost a series 4-0 since a defeat by South Africa in 1970. India XI: A M Rahane, Murali Vijay, Cheteshwar Pujara, Sachin Tendulkar, Virat Kohli, Ravindrasinh Jadeja, Mahendra Dhoni (c, wk), Ravichandran Ashwin, Pragyan Ojha, Bhuvneshwar Kumar, Ishant Sharma. England XI: Shane Watson (c), David Warner, E J M Cowan, Philips Hughes, Steven Smith, Matthew Wade (Wicket Keeper), G J Maxwell, Mitchell Johnson, Peter Siddle, James Pattinson, Nathan Lyon.

India's latest batting sensation Shikhar Dhawan who suffered a hand injury during the Mohali test was on Tuesday ruled out of the fourth and final Test against Australia in Delhi. He will be out of action for six weeks, and Suresh Raina will replace him in the squad. The selection committee had opted for veteran left-handed batsman Gautam Gambhir as the substitute opener, before a blood test showed he was down with jaundice.In the absence of Sehwag, Gambhir and Dhawan, Murali Vijay and Ajinkya Rahane are the only openers in the squad and Rahane, who is yet to play a Test, looks most likely to partner Vijay in Delhi. Suresh Raina, who has played 17 tests, wasn't part of the squad for the four Tests against England and the first three Tests against Australia. India Squad: Mahendra Singh Dhoni (Capt.), Sachin Tendulkar, Murali Vijay, Suresh Raina, Cheteshwar Pujara, Virat Kohli, Ajinkya Rahane, Ravindra Jadeja, Ravichandran Ashwin, Harbhajan Singh, Pragyan Ojha, Ishant Sharma, Ashok Dinda, Bhuvneshwar Kumar.

After bowling out Australia for 223 in their second innings, India chased down the target of 133 with 15 balls remaining before close of play on the last day of the Mohali test to win the Border-Gavaskar Trophy. This marks the first time that India have won three successive Tests against Australia in a Test series. Of the last Ten Tests played by Australia in India, they have lost eight and drawn the remaining three.Earlier, a defiant 65-minute last-wicket stand between Starc (35) and Xavier Doherty (18) consumed 18.1 overs for 44 runs to ensure the Indians bat well into the mandatory overs. When the final hour started, India required 45 runs from a minimum of 15 overs. With only a few overs to go, Jadeja (8) found the boundary twice after Sachin (21) was run out, and then skipper Mahendra Singh Dhoni (18) smashed three fours off Mitchell Clarke in a row to finish the innings and win the series. India XI: S Dhawan, Murali Vijay, Cheteshwar Pujara, Sachin Tendulkar, Virat Kohli, Ravindrasinh Jadeja, Mahendra Dhoni (c, wk), Ravichandran Ashwin, Pragyan Ojha, Bhuvneshwar Kumar, Ishant Sharma. England XI: David Warner, Ed Cowan, Michael Clarke (c), Phil Hughes, Steve Smith, Brad Haddin (Wicket Keeper), Moises Henriques, Mitchell Starc, Peter Siddle, Xavier Doherty, Nathan Lyon. 12th man: Glenn Maxwell.

India has dropped veteran batsman Virender Sehwag from the Test side for the first time since 2008, possibly ending the reign of one of cricket's most brutal openers. The squad was trimmed to 14 with the selectors deciding against picking a replacement for him. The out of form opener has scored just 27 runs in his three innings (2, 19 and 6) during the ongoing series. At the start of the Australia series, his regular opening partner Gautam Gambhir was also dropped from the Indian test squad, but then hit a century for India A against the touring side. 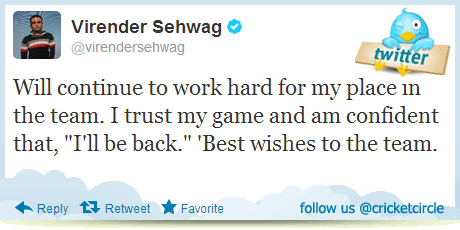 [Above: Sehwag's tweet after the news broke.]
The hard-hitting 34-year-old has scored 8,586 runs in 104 Tests at an average of 49.34 since his debut in 2001. At his peak he was relentless, twice passing Triple Hundred - 309 in Multan in 2004 against Pakistan and 319 in Chennai against South Africa in 2008. However, he has scored only one century since November 2010 - a 117 against England in 2012. His 219 from 149 balls against West Indies remains a world record score in one-day international cricket. In the absence of Sehwag, Delhi-born left-hander Shikhar Dhawan could get a chance to open the innings with Murali Vijay in the two matches to be played in Mohali (from March 14) and Delhi (from March 22) respectively. India Squad: Mahendra Singh Dhoni (Capt.), Sachin Tendulkar, Murali Vijay, Shikhar Dhawan, Cheteshwar Pujara, Virat Kohli, Ajinkya Rahane, Ravindra Jadeja, Ravichandran Ashwin, Harbhajan Singh, Pragyan Ojha, Ishant Sharma, Ashok Dinda, Bhuvneshwar Kumar.

History of the Border-Gavaskar Trophy Series