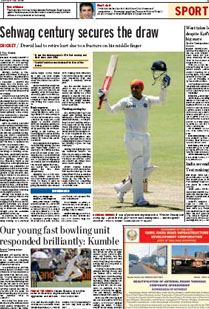 Opener Virender Sehwag on Monday rescued India with a brilliant 151 to force a draw in the fourth and final cricket Test against Australia which still won the hard-fought series 2-1.
The 29-year-old Sehwag notched up his 13th Test century to steer India to safety on a last day Adelaide Oval track as the visitors reached 269 for seven before both teams decided to call off play. The drawn result meant that Australia retained the Border-Gavaskar Trophy but the Indians proved worthy challengers to the world champion team in a pulsating series which provided much drama both on and off the field.
Resuming their second innings at 45 for one, Sehwag scored his first century in 18 months and held the Indian innings together as wickets kept tumbling at the other end at periodic intervals. Barring Sehwag, who struck 11 fours and two sixes during his 236-ball knock, none of the other Indian batsmen could hang around for long against the the disciplined Australian bowlers who tried their best to force a result.
The high-scoring match will be remembered as Adam Gilchrist's last Test appearance and the great wicket-keeper batsman was lustily cheered as he walked out of the field for the last team. In a touching gesture, all the Indian players shook hands with him after the game.

Australia will press for what would be a remarkable victory over India in the final cricket Test at the Adelaide Oval after launching a spirited bowling assault late on day four.
After taking a 37-run lead on the first innings thanks to centuries by Matthew Hayden, Ricky Ponting and Michael Clarke, Australia's opening fast bowlers then breathed life into the match. Mitchell Johnson removed makeshift opener Irfan Pathan leg before for no score in the second over, and at stumps the tourists were 1-45 in their second innings, eight runs ahead with one day to play.
However, Australia's position could have been a lot stronger had Clarke not dropped a straight-forward chance at second slip, in Lee's next over, when Virender Sehwag was on two. Sehwag (31 not out) and Rahul Dravid (11 not out) are two of only five specialist batsmen in the Indian side, but will benefit from a wicket still good for batting.
Gilchrist's likely farewell innings overshadowed the performances of Ponting and Clarke in scoring centuries, following Hayden's 103 on Saturday, as the home side racked up 563 in reply to the tourists' first-innings 526.

Australian captain Ricky Ponting has notched up his fifty as Australia continue to grind down the Indian attack in the final cricket Test at the Adelaide Oval.
Ponting’s 50 came up in 114 balls this afternoon as the Indian attack stymied the Aussies’ usual free-flowing scoring. Ponting (79 not out) and Michael Clarke (37 not out) will be hoping to throw off the shackles tomorrow and pile on a few runs if Australia, sitting on 3-322 at stumps on day three in reply to India’s imposing first innings total of 526, is to have any hope of forcing a result. The last wicket to fall today was Mike Hussey, bowled by Irfan Pathan for 22.
Earlier, Matthew Hayden scored his 30th century, but two great deliveries gave India hope of putting Australia under pressure in the last cricket Test at Adelaide Oval. Hayden and Phil Jaques put the home side on the right path towards reeling in India’s imposing 526 with a stand of 158.

Anil Kumble fell short of a century as India's tail frustrated Australia with a resolute batting display to propel the visitors to a mammoth first innings total of 526 in the fourth and final cricket Test in Adelaide on Friday.
Resuming at the overnight score of 309 for five, the Indians lost Mahendra Singh Dhoni (16) and Sachin Tendulkar (153) in the pre-lunch session but the veteran Kumble (87) led a remarkable rearguard fightback to take the total beyond the 500-run mark. The Australians, leading the four-match series 2-1, laid the foundation for the run chase by reaching 62 for no loss at close on the second day with Matthew Hayden (36) and Phil Jacques (21) at the crease. They still trail India by 464 runs.
It was Kumble who stole the limelight as he put up 107 runs for the eighth wicket with Harbhajan Singh (63) and then teamed up with young Ishant Sharma to add 58 more runs for the last wicket to compound the misery for the home team on a good batting track at the Adelaide Oval. Kumble was the last man out, caught behind by Adam Gilchrist off the bowling of Mitchell Johnson, but not before giving his team a big total to push for a series-levelling victory.
The Australians had themselves to blame for finding themselves on the field for a much longer time as they again dropped quite a few catches with Kumble and Sharma being the beneficiaries.

Sachin Tendulkar struck his second century in the series to hold the Indian innings together after a few early blows in the crucial fourth and final cricket Test against Australia at Adelaide on Thursday.
The 34-year-old master batsman, probably making his last Test appearance on Australian soil, slammed an unbeaten 124 to notch up his 39th ton and steer the visitors to a comfortable 309 for five at close on a keenly contested opening day. Tendulkar, who had scored an unbeaten 154 in the acrimonious Sydney Test, gave another stunning exhibition of strokeplay to pull the team out of the pits after the visitors were reduced to 156 for four at one stage.
Mahendra Singh Dhoni (6) was giving Tendulkar company at stumps after the Indians elected to bat first at the Adelaide Oval which has traditionally seen big first innings totals being posted. Virender Sehwag (63) and the stylish VVS Laxman (51) were the other notable contributors but both would be disappointed not to have converted their starts into bigger knocks on a good batting track.
The Indians were in a spot of bother at 156 for four with Sehwag, makeshift opener Irfan Pathan (9), Rahul Dravid (18) and Sourav Ganguly (7) back in the pavilion but Tendulkar and Laxman salvaged the situation with a 126-run fifth wicket partnership. The visitors, desperate to level the four-match series 2-2, opted to go in with a five-pronged bowling attack by dropping struggling opener Wasim Jaffer and bringing back spinner Harbhajan Singh.

A resurgent India have dropped struggling opener Wasim Jaffer but were still undecided on whether to opt for a five-pronged bowling attack as they go into the fourth and final cricket Test against Australia here on Thursday seeking to level the four-match series.
Jaffer, who has failed in his six innings in the series so far, has been omitted from the shortlisted 12 for the crucial game which India needs to win to square the series 2-2. Off-spinner Harbhajan Singh, who sat out in Perth where India recorded one of their greatest overseas victories, and wicketkeeper-batsman Dinesh Kaarthick have been named in the 12 but the team management has decided to wait till Thursday before finalising the playing 11.
With the Adelaide Oval expected to assist the slow bowlers on the last two days, Harbhajan stands a good chance of playing the match. The Indians also have the option of going in with a five-pronged bowling attack, in which case Kaarthick may have to perform the 12th man's duties. But if they stick to the conventional four-man attack, Kaarthick is almost certain to don the opener's role at the expense of a paceman.

India won the toss and decided to bat


India 1st Innings - All out

Australia 1st Innings - All out