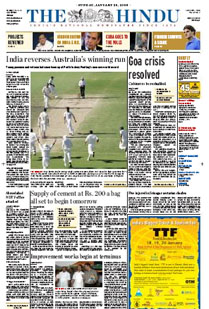 India recorded one of their most amazing Test triumphs overseas when they beat Australia by 72 runs in the thrilling third cricket Test to snap the champion team's record 16-match winning streak at Perth on Saturday.
Set 413 to win a world record 17th Test in succession, the Australians were dismissed for 340 to allow the spirited visitors to reduce the margin to 2-1 in the four match series with one full day to spare. Not many had given the Indians any hope at the WACA, regarded as the fastest pitch in the world, but Anil Kumble and his men came out firing on all cylinders to not only pull off a sensational victory but raise hopes of levelling the series.
The Indians celebrated wildly and hugged each other after R P Singh castled last man Shaun Tait, bringing an end to a dramatic Test which saw fortune fluctuating from one team to the other on the four days.
Michael Clarke, who has struggled to find his peak form in the series, was the highest scorer for the Australians with 81 while Michael Hussey (46) and captain Ricky Ponting (45) were the other notable performers. With the hosts reeling at 253 for eight, tailenders Mitchell Johnson (50 not out) and Stuart Clark (32) used the long handle to good effect to give the Indians some anxious moments.

India put themselves on course for a sensational victory in the third cricket test against Australia whose quest for a record 17th consecutive test triumph seemed to be in jeopardy at Perth today.
After taking a vital first innings lead of 118 runs, the Indians scored 294 in their second innings to leave the home side a target of 413 which only one Test team has ever achieved. The Australians were gasping at 65 for two at close on the third day still needing 348 runs to overhaul the target. Captain Ricky Ponting (24) and Michael Hussey (5) were at the crease.
As many as 11 wickets fell on a dramatic third day's play which saw fortunes fluctuating from one team to the other. But two blows late in the day by Irfan Pathan tilted the scale in favour of the visitors. The stylish VVS Laxman (79) was the top scorer for the Indians while Virender Sehwag (43) and night watchman Irfan Pathan (46) were the other notable performers. R P Singh (30) put on some vital runs down the order to help the tourists take the lead beyond the 400 mark.
With two full days remaining in the Test, a result is definitely on the card as the bouncy WACA track was expected to deteriorate and provide more assistance to the bowlers. The Indians will fancy their chances of stopping the Australian juggernaut as only three teams in Test history have scored 400 or more runs in the fourth innings for victory. An Indian victory will largely hinge on how well the bowlers exploit the conditions in the remaining two days.

India relied on an inspired display by their bowlers who skittled out Australia cheaply to put the the team in the driver's seat with a substantial 118-run first innings lead in the third cricket Test at Perth on Thursday.
The visitors were dismissed for 330 in the first innings but hit back brilliantly by bundling out the hosts for a paltry 212 to gain the upper hand on a bouncy WACA track. The Indians were 52 for one in the second innings and had extended their overall lead to 170 runs at close on an action-packed second day which was dominated by the visitors.
Paceman Rudra Pratap Singh was the pick of the Indian bowlers with 4 for 68 while Irfan Pathan, Ishant Sharma and skipper Anil Kumble chipped in with two wickets apiece to plot a dramatic Australian collapse. The hosts were gasping at 61 for five at one stage before Andrew Symonds (66) and Adam Gilchrist (55) salvaged the situation to some extent with a 102-run sixth wicket partnership.
The partnership, which was assuming dangerous proportions, was finally brought to an end by Kumble who in the process became the first Indian to scalp 600 Test wickets and the third in the world after Muttiah Muralitharan (723) and Shane Warne (708).
It was a remarkable exhibition by the Indian bowlers who managed to extract a lot of swing from the pacy WACA track to rip through the strong Australian batting line-up.

Electing to bat, India were 297 for 6 at stumps on the first day of the third cricket test against Australia at Perth on Wednesday.
Earlier, Sehwag, coming in place of out-of-form Yuvraj Singh, started on a blistering note hitting Australian pace spearhead Brett Lee for a screaming cover drive in the very first over. He played and missed but maintained the tempo with some aggressive shots in the square and cover region that kept the scoreboard ticking at a good pace. Sehwag hit six boundaries in his 58-ball knock. Jaffer, who has been pathetic form in the first two tests, also looking at ease as Sehwag took the pressure off him and the duo gave India just the kind of start they were looking for.
Sehwag was the first one to leave when he tried to drive Mitchell Johnson on the backfoot and extra bounce on the delivery took the edge to wicketkeeper Adam Gilchrist. But the opening job was undone when Jaffer also departed a few overs later when he fiddled with a harmless delivery from Brett Lee and was caught behind the stumps, this being the fifth occasion in the series when the Indian opener has fallen to the Australian spearhead.
Sachin Tendulkar and Rahul Dravid, India's two best batsmen helped steady the team after the loss of the openers in the pre-lunch session. While Dravid scored 93, Tendulkar made 71.

Australia have retained the same squad for the third cricket Test against India in Perth, starting Wednesday.
Although Australia played three fast bowlers and a spinner in the first two Tests, paceman Shaun Tait is a chance to break into the side at the expense of wrist spinner Brad Hogg. Opening batsman Matthew Hayden retained his spot despite his injury troubles during the second Test in Sydney, where he batted in the second innings with a runner because of a leg problem, which also prevented him fielding on the final day. Chairman of selectors Andrew Hilditch said Hayden's fitness would be reviewed in the lead-up to the match.
Australian squad: Ricky Ponting (Captain), Adam Gilchrist, Matthew Hayden, Phil Jaques, Michael Hussey, Michael Clarke, Andrew Symonds, Brad Hogg, Brett Lee, Mitchell Johnson, Stuart Clark, Shaun Tait.

India won the toss and decided to bat


India 1st Innings - All out

Australia 1st Innings - All out

India 2nd Innings - All out

Australia 2nd Innings - All out