The International Cricket Council have confirmed Harbhajan Singh has been cleared of making a racist comment to Australia all-rounder Andrew Symonds.
The 27-year-old was initially found guilty of racially abusing Symonds by ICC referee Mike Proctor after allegedly directing a "monkey" insult at the mixed-race all-rounder during the second Test of the four-match series at the Sydney Cricket Ground (SCG). But at an appeal in Adelaide on Tuesday, New Zealand High Court Judge John Hansen ruled there was not sufficient evidence to prove an offence under rule 3.3 of the code of conduct, which relates to racially insulting behaviour, but decided Harbhajan should be charged with a Level 2.8 offence.
The off-spinner pleaded guilty to that charge and accepted a fine of 50% of his match fee. Prior to the hearing, a letter signed by all the players involved - from both Australia and India - was tendered into evidence as an agreed statement of facts as to what took place at the SCG. Audio and video evidence was presented at the trial, while a full explanation of Justice Hansen's decision will be made on Wednesday.
The Commonwealth Bank triangular series will also go ahead, with the Board of Control for Cricket and India pleased with the outcome of the hearing. Cricket Australia spokesman Peter Young is keen for both sides to put the unsavoury incident behind them and concentrate on the triangular series involving the two teams and Sri Lanka looming on the horizon. 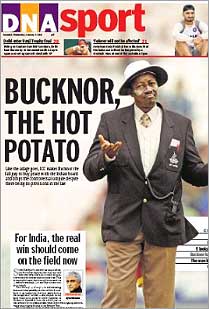 ICC have taken a U-turn on their decision to retain umpire Steve Bucknor for the third and fourth tests to be played at Perth and Adelaide respectively. ICC chief Malcolm Speed has confirmed this. New Zealand umpire Billy Bowden would replace the disgraced West Indian umpire. This was the first demand by the BCCI, which has been fulfilled, but the issue of Harbhajan Singh's ban still remains to be addressed.

Since the ICC had received an appeal by Harbhajan Singh against his ban, it has technically made him eligible to play for the third Test match at Perth. An appeals commissioner would be appointed within the next 24 hours by the ICC to look into the case.Meanwhile the ICC has appointed Ranjan Madugalle to facilitate the meeting between captains Anil Kumble and Ricky Ponting. 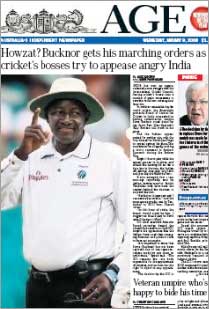 The International Cricket Council (ICC) has dumped umpire Steve Bucknor from the third Test between Australia and India in Perth.
The Indian Cricket Board (BCCI) had requested that the Jamaican umpire be replaced after a series of poor decisions in the controversial second Test in Sydney. The ICC will also appoint a code of conduct commissioner to oversee an appeal against Indian spinner Harbhajan Singh's three-match ban, after he was found guilty of racially abusing Australia's Andrew Symonds.
The Indian Cricket Board has said it will not continue with the tour if the ban is not lifted. New Zealand umpire Billy Bowden will be substituted for Bucknor for the Perth Test beginning on January 16. Mr Speed says the changes have been made to alleviate pressure and to ensure the following two Test matches are played in the spirit of the game.
The code of conduct charge against Brag Hogg will be heard by match referee Mike Procter prior to the Perth Test match. Mr Speed says he received a formal request from India that Bucknor not umpire in the third Test. 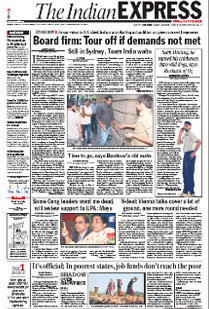 Sachin Tendulkar has denied sending an SMS to BCCI chief Sharad Pawar requesting that the tour of Australia be suspended until the ICC lifts the ban on Harbhajan Singh.
"Sachin Tendulkar has not sent any SMS to Pawar on this issue. He had called up to clarify this point," BCCI vice President Rajiv Shukla said. Media reports on Monday said that upset over the ban imposed on Harbhajan for allegedly racially abusing Australian all rounder Andrew Symonds, Tendulkar sent an SMS to Pawar assuring him that the off-spinner was innocent and suggesting that India should play the third Test only if the punishment is revoked.
"Harbhajan is innocent and I can assure you on this. In this hour of crisis, the Board should stand by him. I suggest we should play in Perth only if the ban is lifted," Tendulkar reportedly told Pawar through the text message. Tendulkar was among the five Indians, who attended the ICC Match Referee Mike Procter's hearing into the allegation of racial abuse made by Symonds. 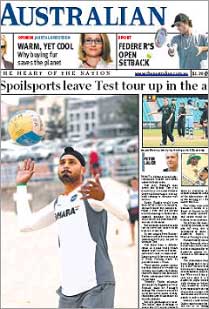 The Indian cricket board (BCCI) has suspended its team's tour of Australia pending the outcome of an appeal for banned spinner Harbhajan Singh. "The Board will appeal to the International Cricket Council (ICC) to review the decision of the Match Referee and suspend its operation till the appeal is disposed of," the BCCI said in a statement released today.

Unfair allegation of racism against our Indian player is wholly unacceptable

We tried our best to defuse the situation but their collective behaviour through the game and then, the unwarranted racial slur on Harbhajan led to this

There's been no sledging

Angry Indian cricket fans held street demonstrations and burned effigies of two cricket umpires on Monday, blaming poor decisions for their team's defeat in the second test against Australia, while criticizing a three-match ban handed to spin bowler Harbhajan Singh.
Indian media also reacted with anger toward Harbhajan's suspension after he was found guilty by match referee Mike Proctor of racially abusing Australia all-rounder Andrew Symonds, and questioned the sportsmanship of the Australian team.
"Indian team, come back home," chanted dozens of fans in downtown Jammu, the winter capital of India's Jammu-Kashmir state, as they set fire to effigies of umpires Mark Benson and Steve Bucknor, accusing them of poor decisions against India. Angry fans also came out on the streets in the western town of Vadodra and the northern city of Kanpur after India lost the test to Australia at Sydney on Sunday, the Press Trust of India news agency reported. After the match, won by Australia by 122 runs in the scheduled second-last over of the day, India captain Anil Kumble accused Australia of unsportsmanlike conduct and the team's manager called for "incompetent" umpires to be replaced. 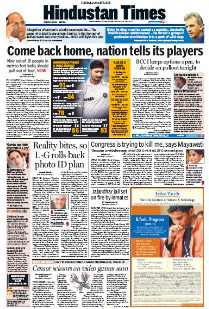 India spinner Harbhajan Singh has been banned for three Tests after being found guilty of racial abuse during the stormy second Test against Australia, the International Cricket Council (ICC) announced yesterday.
Harbhajan was found guilty under Level 3 of the ICC's Code of Conduct following a clash with Australian all-rounder Andrew Symonds.The charge was laid by match umpires Mark Benson and Steve Bucknor after Australia captain Ricky Ponting had accused Harbhajan of making a 'monkey' comment at Symonds, the only black player in the home team.
Following a four-hour hearing held at the Sydney Cricket Ground yesterday, ICC match referee Mike Procter delivered his judgment to the players involved. He found the case against Harbhajan proved and informed him the off-spinner that he was imposing a ban of three Tests. The contentious incident occurred when Harbhajan was batting with Sachin Tendulkar during India's first innings on Saturday.

Hearing against Bhajji put off

The disciplinary hearing against Harbhajan Singh, scheduled for Saturday evening, was put off till Sunday, following a request from the Indian team management.
Match referee Mike Procter will now hear witnesses on the charge of a Level 3 offence under the ICC Code of conduct against Harbhajan at the conclusion of the final day’s play of the second Test match here at the SCG. The charge pertains to the alleged racial abuse of Andrew Symonds, and was made by umpires Mark Benson and Steve Bucknor after receiving a complaint from Australian skipper Ricky Ponting. “At the request of the India team manager and under the circumstances, I have exercised my discretionary powers to postpone the hearing until the conclusion of this Test match,” Procter said in a release. “I am satisfied that with a further 24 hours, India will have time to sufficiently prepare for this hearing.”
It is learnt that manager Chetan Chauhan’s request for a postponement was at the instructions of the Board of Control for Cricket in India (BCCI) so as not to detract from the Test under way. Ponting will have to substantiate his charges or face legal action if the Indians deem it fit. Harbhajan could face a ban of between two and four Tests or four and eight one-day internationals if found guilty. The off-spinner has repeatedly protested his innocence from the time the charge was made. Unless there is impeccable incriminatory evidence with either the match officials or the Australians, it could easily be one man’s word against another’s.
Procter admitted to the official telecasting channel that the umpires had not heard anything on the field. “They reported to me that a breach of conduct was reported to them by Ponting,” Procter told the channel. “It’s a Level 3, which is pretty serious. The umpires didn’t hear anything, they didn’t know anything about it. The end result is what I want to achieve.” Meanwhile, the ICC has roped in reputed British lawyer Nigel Peters to advice match referee Mike Procter during the disciplinary hearing, adds PTI from New Delhi. Peters, who is in Sydney, will advise Procter and the two teams on procedural matters during the hearing.

India and Sri Lanka join Australia in the Commonwealth Bank Series, which is scheduled to start from February 3 - March 7, 2008.

Get the latest news of Commonwealth Bank Series 2008 →

India vs Australia Past Cricket Series